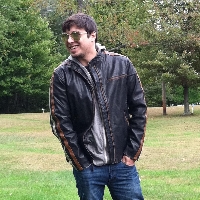 A personal campaign sponsored by Robyn

Beloved son and brother, Anthony James Chilson went to be with the Lord, Oct 2, 2021 at his home in Austin, TX after succumbing to his battle with anxiety and depression.

Anthony started school in Athens PA where he participated in Odyssey of the Mind and was a member of Athens High School Thespian Club prior to moving to Meadville PA with his parents and brother at age 12.

Anthony honed his soccer skills on the Valley Youth Soccer teams and later refereed youth soccer games in Meadville PA where he played on the Maplewood High School Soccer Team. He wrestled and took great pride in placing first in tournaments for his weight class.

Anthony worked at the Meadville KOA Campground his parents owned and operated until after his college graduation. His family loved working together. He was a certified lifeguard and loved running events with the little kids. One example is helping the little kids to win prizes at the kiddie carnivals. He also enjoyed working on the haunted house, monitoring the jumping pillow, and more. Anthony often dressed as the campground mascot, putting his acting skills to work, and having fun with the kids. Prior to that, the Chilson family camped together routinely, and made many great family memories.

Anthony learned to speak German for his trip to Europe, where he toured many cities in Germany and visited the grandparents of his high school and college sweetheart, Naila Rahman.

Anthony studied music at Clarion University where he was a member of the Phi Mu Alfa Sinfonia Fraternity. He was a talented guitarist and won a high school talent show with his bandmates who called themselves “Competing With Thunder.”

Anthony transferred to Lockhaven University, where he graduated with honors and was inducted into the National Social Workers Honor Society. He was employed by the Bradford County Human Services and worked as a social worker for CYS in Towanda PA following his graduation. Helping people was a life calling for Anthony. He cared deeply for his clients, especially young children and was a dedicated and steadfast advocate for them. He later managed a home for mentally challenged adults in Sayre.

In 2012, Anthony reconnected with a young woman he'd met on vacation as a teen. Upon her graduation from college, Shelby Bixler followed Anthony to Athens PA. A few years later they relocated to her hometown, Toledo, Ohio. On December 2, 2016 Anthony married Shelby in a beachside ceremony surrounded by family and friends. They shared many happy years together, and relocated to Austin Texas in August 2020 where he accepted a transfer as a Store Manager for Bed, Bath, and Beyond. Although he and Shelby separated earlier this year, they still loved one another.

While his family does not fully understand this loss, they know that in the dash between his birth and death, Anthony was a very sensitive and caring young man with a quick wit and incredible sense of humor. He was a light, well known for making others laugh. They know that he will be missed, that he made a difference, and that this world is a lesser place without him.

Anthony is now in heaven’s embrace with his grand parents, Robert and Donna (Cooley) Smith of Sayre and several uncles.

His family is hosting a celebration of life remembrance on Saturday Oct 30, 2021 at 11:00 am at the Athens Township Fire Hall at 211 Herrick Ave, Sayre, PA 18840. Please dress causal, bring fun stories, or ways he touched your life to share with everyone.

In lieu of flowers, the family asks that donations be made to the American Foundation For Suicide Prevention at https://afsp.org/donate-to-afsp. We thank you for your generosity in Anthony’s honor.