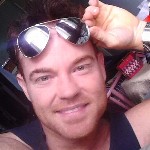 Born 1977 – Lived in a house outside of Wimauma

Died September 4th 2015 – He is survived by his loving mother, father, brother, 2 sisters and their family along with numerous aunts and uncles.

He worked as a massage therapist for many years.  He wanted to help make people feel better.

In recent years he drove an Ice Cream Truck.  He loved children, people and animals.

He enjoyed the beach, body boarding, snorkeling, karaoke, and modeling.    He appeared on several book covers.

He was selected as the winner of September 2015 Red Head Appreciation society calendar contest.

He was preparing to go back to school to become a RN.

We love him and he will be missed by all.