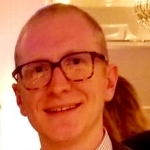 Spencer Richard Bruining was born August 19th, 1992 in Waynesboro, PA to Tracy and Bill Bruining and passed away on January 9th, 2019. As a small child he lived in Waynesboro, Dublin, OH, and Marysville, OH before making his home in North Carolina. Spencer graduated with honors from Fuquay Varina High School in 2010 and went on to attend Campbell University, Wake Technical Community College, Appalachian State University, and Caldwell Community College. He proudly attained his Culinary Arts degree with honors from Caldwell Community College in December of 2018. Spencer was an avid soccer player, cross country runner, and had an amazing passion for music which included his abilities to play the bass, cello, and guitar. Upon moving to Boone, he fell in love with rock climbing and enjoying nature to include a backpacking trip across Europe. Spencer was also an amazing chef who displayed his talents most notably at Westglow Resort and Spa in Blowing Rock, NC. He also exhibited his management gifts at Lowes Foods, Five Guys, The Come Back Shack, all in Boone, NC and the Compass Group in Greensboro, NC.