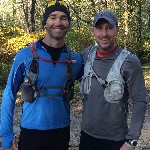 On Memorial Day weekend of 2018, Alexander Hall and I will be undertaking the biggest challenge of our lives. Over 25 days in early summer, we will be running the entire Bruce Trail in Ontario, Canada from north to south, then continuing on to run the Erie Canalway Trail in upstate New York from Buffalo to Albany. We will be running 1000 miles, or 40 miles a day for nearly three and a half weeks, in what we've called the See Our Symptoms (SOS) Run: a Million Steps to Mental Health Awareness and Suicide Prevention.

What we will be attempting to do is dwarfed by the pain and anguish those who suffer from mental illness and thoughts of suicide endure. I have seen it firsthand. In April of 2017, I lost my own mother to suicide. For 70 years, she was the embodiment of joy, affection, compassion, goodness, tenderness, and pure love. She was a devoted wife of nearly 50 years to my father, and she adored her four children almost as much as her twelve grandchildren. She touched the lives of countless young children as an elementary school teacher, an occupation which she was divinely called to do. She immediately put at ease and brought smiles to the faces of the strangers she would meet in her church, in her school, and in her community.

But sometime after her 70th birthday, something changed. Gone was the jovial mother and grandmother in her golden years of retirement. In her place was someone who became overly preoccupied with the physical various ailments she was experiencing. At first, we also attributed her symptoms to a purely physical cause, but after she saw countless doctors who ran countless tests over nearly a year, we began to realize that she was suffering from anxiety and mental illness. We encouraged her to seek therapy. We encouraged her to see a psychiatrist. We encouraged her to find a support group. We encouraged her to be open about her fears and the underlying causes of her anxiety. What we didn't realize, however, was that she was also suffering from severe depression. She had hidden her symptoms so well that neither her children, her husband, her psychiatrist, nor her neurologist could see how much anguish she was in, and shortly after her 72nd birthday, she took her own life.

As we look back on it now, the signs of severe depression become apparent. They were there and, yet somehow, we all failed to see them. While we were proactive in getting her treatment for anxiety and the various physical manifestations of it, we were oblivious to the small signals that she was also deeply depressed.

Seeing the signs of mental illness, severe depression, and suicidal tendencies early is critical to saving the lives of those who might choose to take their own. The neighbor next door, the friend at work, and the 22 veterans a day succumbing to suicide, the first responders, military members, students, and athletes suffering from PTSD -- they all need our help. The goal of this run is not only to bring attention to their signs and to intervene before it's too late, but also to raise general awareness for mental health education and to support all those who've lost a friend, colleague, or loved one to suicide. Let's remove the stigma surrounding mental illness. Let's be open to discussing our anxiety and depression. Let's create an environment where people who've contemplated suicide are comfortable airing those darkest of thoughts. If we can save even one life through awareness of the signs, then it's worth it.