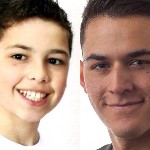 Last year, like tens of thousands of others, I was suffering with extreme depression and suicidal thoughts.  But I was a lucky one: I was pulled out of the dark hole I had dug for myself by close friends, family and assistance from the American Foundation for Suicide Prevention (AFSP).

Nearly 45,000 lives are lost to suicide annually. This number can be lessened when friends and family are educated on the signs affiliated with extreme depression and suicidal tendencies.

AFSP's mission has been close to my heart for a couple of reasons:  In 2011, my best friend, Aaron, (in the photo with me) became another suicide statistic.  Like others, Aaron felt that no one understood him or his place in the world.  Fast forward to 2016 and combine Aaron's passing with my own situation and you can see why I feel I was a lucky one.

Unfortunately, this is not the case for everyone.

Depression doesn't need to be a terminal illness:  think of it as a beast that needs to be slain.

As I mentioned earlier, nearly 45,000 people a year feel too alone to go on, but we can change that by making sure these people know that they have strong support in AFSP and others battling this disease.

On October 8th of this year, I will be running the Long Beach half-marathon in support of those taken too soon by depression and suicide.  If you or anyone you know has ever been affected by suicide, I ask that you please consider making a donation to AFSP, whether it be small or large, it all can make a difference to someone.

Thank you for your understanding, support and let's slay a beast together!

The AFSP is a 501(c)(3) public charity.  Every donation is deductible as a charitable contribution as allowed by law.  The AFSP's tax identification number is 13-3393329.