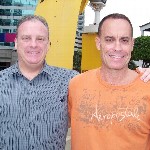 Here at Summer Hill Entertainment, we believe that there is no greater activity than the act of giving.  That is why we have decided to select a charitable organization where we will contribute a portion of our profits.  But, in addition to our own contributions, we want to invite all of those who work with us to read the story and decide for yourself if you wish to contribute, as well.

After considering many charities, the decision ultimately became a personal one.  There are so many great charities out there and they do so much.  But, none are as close to home for me as The American Foundation for Suicide Prevention. Rated “A” by the advocacy group, Charity Watch.

On May 1st, 2014, my brother, Gerard “Jerry” Chalmers took his own life. It was particularly hard for me as I was the one who came home from work late one night to find him.  We had been working, as a family, to help him get back on his feet after arriving from living and teaching in Asia for many years.  But, certain bouts of depression made it impossible for him to continue his work and he decided to come home and let his family help him out.

It’s very hard to lose someone so close to you.  As a family, we grew up very close with modest roots, in a working-class family living in an upper crust society.  We had many hurdles, but all of it helped to make us close.  My brother struggled with alcoholism and successfully overcame it with 13 years of sobriety. But, still his demons would not go away.  It is our opinion as a family that Jerry contracted a rare bacterium known as leptospirosis. After swimming on the Mekong Delta (he was a big swimmer) years ago he fell ill and was hospitalized. He nearly died.  Afterwards, he always felt that there was “something wrong” in his head.  Scans of his brain showed a shadow that doctors dismissed as possibly a sinus infection deep in his skull.  No further tests were done. A famous neurosurgeon explained to me that such a bacterium can cause a Traumatic Brain Injury (TBI) much like a concussion from a land mine or years of pro football. One of our tracks was healthcare and getting him to doctors for all of these issues.

In any event, Jerry could not find the peace he was seeking and ultimately took his own life.  When that happened, I felt so abandoned and angry with him because I thought we had been making progress. Like we were so close to beating “it”, and that is the real tragedy of it all. Sadly, we are the ones left to suffer in the aftermath to try to make sense of it all.  I always feel like there could have been something more that I could do.  Hopefully, these donations will make a difference. And if we can save just one life, then it will be worth every single penny of my life’s work.

On a boat off the coast of Newport Beach, CA, I said my last goodbyes to my brother. The ocean was his home.  And for now, it is his final resting place.  These are the words that I said:

Our goal of $5,000 will enable us to receive a personalized Memorial Fund plaque. After any goal is met, we will raise the goal to meet new challenges.

Thank you for reading our story.  There is so much more to say about my brother than talking about his end.  His life was full of fun and adventure. And he lived it the way he wanted.  I miss him.